The life of the concert pianist is rarely as busy as when the concert diary looks empty; those weeks are spent locked up in our practise studios learning new repertoire or polishing up old pieces. This is where I find myself right now. As usual I have a wide range of music to work on - from standard works to more obscure music well outside the "canon" of international standard repertoire. In my first concert of the new season, on 5th of September, I have the tremendous pleasure and honour to give the world premiere performance of a brand new piece of Swedish piano music during the Stockholm Piano Festival in the Stockholm Concert Hall. The complete antithesis to playing a Beethoven sonata or a Chopin ballade - simply something nobody has ever heard before! 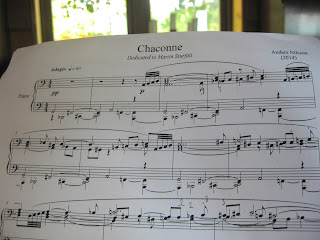 The piece in question is called Chaconne and was commissioned by me from Swedish composer Anders Nilsson. Anders has written two works for solo piano before, and me and my colleagues widely recognize those as some of the best music written for piano in Sweden in the last few decades. Those works were both composed more than 20 years ago, and despite their success we have had to wait a long time for another piano work from Anders' pen... until NOW! Personally I can hardly wait to present this new piece to the public, and I have just come far enough in the learning process to finally hear it properly myself, and just as I suspected we are faced with some powerful and beautiful music. So, be there on the 5th September!

Working on music by a living composer is something to get excited by in its own right, at least for someone like me who spend a lot of my time playing music by people who have been dead for hundreds of years. The interaction with the composer definitely adds another dimension to the creative process, and then there is the rather more mundane fact that if something is unclear in the score you can simply send a text message to the composer asking "should I be repeating the e-flat on the third beat of bar 104?" or "do you really mean f-natrual in the left hand in bar 146?". Would that we could send a text message to Beethoven now and again...!

When I start working on a certain piece of music my brain often make more or less random connexions between that and other works that I have previously played. And this time it occurred to me what extraordinary music has been created within the chaconne genre (and the related passacaglia). Here are some of my personal favourites, please feel free to add yours in the comments!

and as of recently...
Anders Nilsson - Chaconne!
Posted by Juniper Hill Pianist at 08:47

Juniper Hill Pianist
Martin is an international concert pianist. He is married to Karna and they live on small farm in the middle of the county of Sörmland in Sweden, a little more than an hour outside Stockholm. In their spare time they enjoy keeping bees, chickens, pigs and to grow their own vegetables. Unsurprisingly, Martin's other big passion in life (aside from music) is food and cooking and he spends a lot of time dreaming about such things as homemade charcuterie, pickled fruits and vegetables, cider and beer, to name but a few.